The weather has certainly been fine over the last few days as this interesting PR shot that appeared today testifies…. 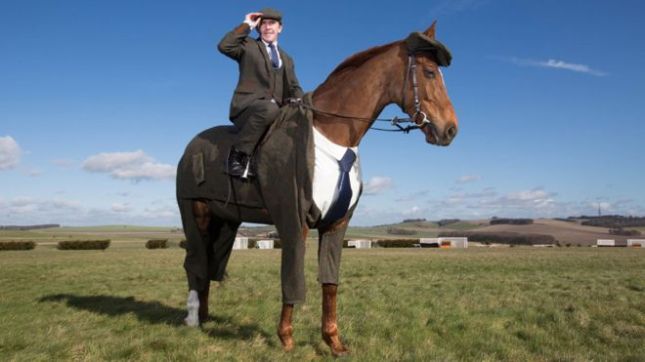 Douvan looks an exceptional novice and given a clear round it will be a shock if he’s beaten. Odds of 2/5 reflect this and with now only 7 runners there isn’t really an each way angle to play with. Vaniteux and Sizing John should be fighting it out for second from a form basis but there’s always a danger that if they try to take on the fav they could suffer for it and let the way in for one of the outsiders to jump into the frame. A race to watch but no bet for me now

Out Sam was my choice yesterday and I’ll stick with that although I won’t put him forward as a recommendation as the hoped for price of 8/1 is no longer there now. I do think he’s very well handicapped but it is in the back of my mind that he may not be streetwise enough for such a big field. It’s a very hot race with Holywell, Southfield Theatre and Morning Assembly all capable of performing well off their respective marks. Southfield Theatre would be marginally the pick of these for me from a price perspective at 20/1 with the prospect of the ground now getting close to the good he prefers

Again covered in the preview and 6/1 still there for The New one so that is where the recommendation lies.

Preview night chat seems to suggest that Sempre Medici will be held out back and ridden to place rather than win so he could be the one for anyone looking for a long priced outsider.

Stephanie Frances is interesting at a big price. Dan Skelton has stated he’ll only run her if she gets her beloved good ground and that seems increasingly likely. The trip is a question mark but if this was a slow pace (has happened in this race before) she does have a potent turn of foot. With trailblazer Desert Queen in the field however, we are more likely to get a proper stamina test

No bet here. Minella Rocco looks to be plotted up for this but still has to questions to prove on jumping around this course. If I were forced to pick one it would be Measureofmydreams but I could easily make a shortlist of 7 or 8 possible winners in this tricky marathon event.

This is a handicap but with only 4lbs separating the 20 runners you would be forgiven for knowing that!

I’ve had this race in mind for Double Shuffle for some time and he’s jumped around the course with aplomb already twice this season. He’s only been raised 4 lbs for a win on ground that was probably a bit too soft for him and the surface here should suit much better. He was a decent hurdler but chasing was always going to see him in a better light and hope he can get Paddy Brennan off the scoresheet on what could be a good week for him. Enhanced place terms available here with Betfair Sportsbook if you can get on with them

Aloomomo is feared and had a nice prep over hurdles at Ascot for this. He’s ben raised 11lbs since his last chase win and may well be up to that. The ground will be quicker here than what he has won on before however. At a best price of 6/1 I think the market has him plenty short enough already.
Recommendation: 1pt ew DOUBLE SHUFFLE @11/1 (Betfair Sportsbook ¼ odds 12345)

Thanks for reading and good luck!

Main news this morning was the almost nonchalant aanouncement that Vautour would head for the Ryanair on Thursday instead of Friday’s Gold Cup by the owner (last week he was quoted as ‘Gold Cup’ or nothing). This will have sent the Ryanair market into disarray. It’s good news for Cue Card supporters like myself and I imagine that Smad Place backers will take most heart from this announcement. That one is now far more likely to get the uncontested lead he seems to enjoy (Road to Riches could possibly keep him company)

As for today’s bets. Unfortunately the blog went up just last night after Pricewise (Tom Segal) put up his selections which included Double Shuffle in the last. Consequently the odds weren’t around for long on that. The 9/2 on Altior has gone but I’m surprised to see that Polly Peachum has gone out to 15/2 with some firms (giving 15/8 on the place despite that being no higher than 11/8 on exchange place only markets). This is largely due to strong support for the favourite Vroum Vroum Mag.

In the 2.50 Out Sam has hit the desired 8/1 price with a few firms and with 5 places available that is now an extra bet for the blog.

Wednesday preview will be online this evening – hopefully before the Pricewise beast is unleashed this time!