Last weekend was always going to have a major bearing on some of the Ante Post markets for the big festival.
Consequently there is another selection added to the portfolio for the March festival.
World Hurdle 12th March
I was a bit dismissive of Saphir Du Rheu’s chances before this race. Stamina for 3 miles was unproven and his sole previous venture at the course was less than inspiring. It wasn’t a surprise therefore to see him drift in price before the off.
What happened in the race itself has now seen me become a supporter as he firmly put to bed both concerns
I’ve been a fan of Nick Williams’s Reve De Sivola since his 4yo days and the heart dearly wanted to see him prevail on Saturday. It’s his performance which for me highlights the chance of Saphir du Rheu in the big one.
‘Reve’ has always been a bit hit and miss with hurdling but here I don’t think I saw a mistake once and this was a true stamina test with him and Cole Harden forcing the pace. Subsequent comments from many at the course that the 10yo was looking really well make me think he probably ran to one of his best performances here on ground that would have been to his liking. I certainly rate it better than his previous narrow Ascot defeat of Zarkandar where there were some notable jumping errors.
It is much to Saphir du Rheu’s credit therefore that he was able to sit happily behind the strong pace and then be produced to outbattle a supremely good battler up Cheltenham’s hill.
He was in receipt of 4lbs of the second for sure, but the winner is likely to have scope for improvement come March and will be the better suited by less soft ground.
It was an ideal trial for me. Paul Nicholls stated afterwards there was more to come and better ground would suit.
The opposition:
Favourite for the World Hurdle is last year’s victor More of That. If he returns in the same form he could well be a class apart but there is a big question mark hanging over Jonjo O’Neill’s charge. He hasn’t been seen since a defeat in November in very soft ground and has subsequently undergone a wind operation.
Annie Power is a low price in some lists but that is only with firms offering ‘Non Runner No Bet’ and last year’s second seems a much likelier runner in the Mares Hurdle instead.
Of the rest, Zarkandar remains a threat but I rate him a little behind the selection now as explained previously. Rock on Ruby hasn’t yet proved stamina over 3 miles and his optimum distance could well be half a mile shorter. Lieutenant Colonel has emerged as the main Irish raider presently but didn’t seem to cope with the hill too well here as a novice last season. Beat That also has to prove he likes this course
All in all, I rate Saphir du Rheu a decent bet right now with 7/1 still available.

Thanks for reading – comments always welcome

Posted by senormoodoir on January 26, 2015 in Uncategorized

A belated Happy New Year to all!
The blog has been quiet since November while I have been having adventures in New Zealand. With videos now scrutinised from the time I was away it’s time to put together a January Ante Post briefing. I did similarly last year with some success when 25/1 pick O’Faolains Boy did the business at Cheltenham the following March.
That was the springboard to a very successful period for the blog selections. Alas, Aintree and Royal Ascot were more forgettable so 2014 ended with 218 pts staked and 213.91 pts returned – a loss of 1.8% on the year ( I still can’t believe that 50/1 pick Inchila didn’t get placed in the Oaks though!)
Once again overly soft ground prevents too much interest in the immediate racing calendar but it’s now time to get active with some Ante Post picks again as the Festival gets ever nearer.
To keep a closer eye on profit/loss this year I’m assuming a bank of 50 pts is being held at the start and base staking around that
Here’s the verdict for the current Ante Post Value in weeks ahead:
Cheltenham:
Champion Hurdle 10th March
No selection here but this already has the look of a race that could cut up with 3 obvious candidates – Faugheen, The New One and last year’s winner Jezki. I would not be at all surprised if as expected Ruby Walsh rides Faugheen to see old champion Hurricane Fly not turning up for the race (for me despite winning here twice his form has always been better in Ireland). I can’t see anything else threatening these three presently so at the prices would not put anyone off Jezki each way with ¼ odds available 123 and some Non Runner No Bet. He should be a different horse again on Spring ground and find it hard to see him out of the frame.
RSA Chase 11th March
Following the basis that Irish staying bred 7yos hold the sway here (now successful in 9 of last 10 runnings) proved highly profitable last year. I look for the same formula once again. All of the last 10 winners had at least 3 chase runs prior to running here to put some emphasis also on chasing experience.
Kings Palace the current fav is 7 and bred in Ireland. He needs another chase run to meet the criteria but of higher concern is his previous Festival performance. He looked to have all in his favour at last year’s Albert Bartlett but was well beaten by the time he fell. At the moment I do have a concern that all of his best form is before Christmas – and he certainly won’t have things all his own way in front this year with equally bold jumping Coneygree a likely challenger.
If these two do both turn up they could be their own worst enemies and I’m looking at two classy types who do meet the criteria to be beneficiaries.
Like O’Faolains Boy, Champagne West was 4th in the Albert Bartlett but has already proved himself an improved horse as a novice chaser this year reaching a mark of 152 in 3 starts over the course. They have all been over a shorter trip but he was beaten for pace by the classy Ptit Zig last time (will be a very tough nut to crack in the JLT chase at the Festival) and a step up in trip is now in stable’s plans. Baed on what he did as a novice hurdler, this should suit and I can also see improvement if he can get a good lead in the race (found himself in front far too soon on last two occasions)

The other is Southfield Theatre who hasn’t run since the end of November when soft ground would have been against him. It’s unlikely he will face that at the Festival where he ran a great race last year to be a narrow second in the Pertemps Final. That marked him as a solid 150+ hurdler when ground conditions are right – and there seems no reason why he cant match that over fences.
Although he is quoted by some firms for the National Hunt Chase, this would seem the obvious race for him with Paul Nicholls having no other main candidates now that Saphir Du Rheu is switching back to hurdles (the latter still quoted by many firms for RSA at time of writing despite this news!)

Both selections have already met the criteria of having 3 chase runs and their respective marks of 152 and 150 would easily be already up to winning an average renewal of this race
Recommendations
1pt ew Champagne West 16/1
1pt ew Southfield Theatre 20/1
Both widely available at time of writing http://www.oddschecker.com/cheltenham-festival/rsa-chase/winner

Albert Bartlett Hurdle 13th March
The novice hurdle event for the real stayers and I see some value here in Nigel Twiston Davies’ Blaklion.
It’s notable that his most impressive run was over 3 miles at this course when he was able to sit off the pace. He’s been beaten in shorter races when having to race from the front to try and expose stamina flaws in speedier rivals. 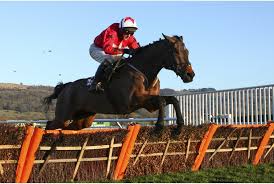 Here, I hope he can sit in behind again and the undoubted stamina can be used to pick rivals off once more.
He is going to be entered in other races but it will be a shock if this isn’t the ultimate target.
No More Heroes is current Ante Post fav and does look a good staying prospect but I do have reservations that the ground maybe quicker than ideal come the day
Dan Skelton’s Value at Risk could be a more potent threat. I have great respect for this up and coming trainer and this could be the horse to take him onto a higher stage – but currently he’s too short to back on what he has actually achieved – especially as it’s not certain which novice race he will end up in.

The selection could be vulnerable to an opponent with real class but I’m not sure if there’s enough guaranteed to be up against him yet that qualify on that score and he is now overpriced as a result.
Recommendation
1pt ew Blaklion 12/1 (Paddy Power)
There are too many other Championship races at the Cheltenham Festival with uncertain runners to get involved in as yet. The Gold Cup doesn’t scream out value anywhere as yet. Handicaps will have to be left until much nearer the time

An so the other recommendation comes in National Hunt racing’s showpiece event, The Grand National (Aintree, 11th April)
As posted last year, the optimum criteria is a 9,10 or 11 year old with previous ‘National’ raceexperience.
It’s also important these days not to show your hand too early to the handicapper (current fav Unioniste has probably already blown his chance with the handicapper by being upped to 159), and for trainers to keep their powder dry until weights are released in February.
I’m delighted that Godsmejudge appears to be getting the right kind of preparation and hasn’t been seen so far this season (today being pulled out of Saturday’s Peter Marsh Chase at Haydock was a pleasing thing to see with conditions likely to be far too soft there)
He’s long looked an ideal type for this event through his Scottish National exploits as a novice and has now reached the ‘golden’ age bracket

Fingers now firmly crossed he can keep to his current mark of 147 before weights are announced. That should get him a weight below 11 stone which can so often be a telling factor in this race
Sadly the last vestiges of 33/1 went over the last few days but 25/1 or more is still acceptable odds for me now that he’s had the Christmas holiday I was hoping for.
Recommendation
1pt ew Godsmejudge 28/1 (Betfair Sportsbook)

Posted by senormoodoir on January 15, 2015 in Uncategorized