As with previous years here are a few thoughts for National Hunt racing’s greatest spectacle at Aintree on Saturday.

There are many other good preview sites out there this year(some in much greater depth on a runner-by -runner basis) but here is my personal synopsis.

I have given points to the main statistical aspects I use (further details can be seen in previous year’s GN blogs. These focus on stamina, weight, age and preparatory runs. After analysing these it’s determined the main contenders in my eyes and this year’s runners can be seen in the table on link below

This year doesn’t seem to have quite the same overall class of runners as other recent ones. There are several with serious question marks and many others looking to be out of form and badly handicapped.

There are just two runners who get the perfect score – Vintage Clouds and last year’s Irish National hero General Principle. The latter hasn’t been in great form this season and is badly weighted with Vintage Clouds when they both had their final preparatory race.

It is Sue Smith’s grey who firmly tops my shortlist this year and qualifies on every front. His third in last year’s Scottish Grand National is the biggest pointer for him here and he looks to be improved from that on his last run (first after a wind operation). Sue has won this race before with Auroras Encore who also advertised his chances before in the Ayr marathon 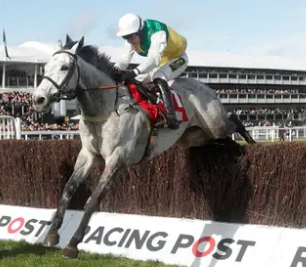 Like the Grand National, the Scottish version needs good positioning throughout despite it being a thorough test of stamina. Some who crab Vintage Clouds think his jumping isn’t swift enough to cope with the early pace here but that run at Ayr is enough to convince me he is up to it.

Like all the runners he’ll need to get a good position after the early dash over the first few fences but if he can get himself a prominent position before Bechers I think he’ll be very tough to keep out of the finish. He can cope with both good and soft ground so the recent rain is not an issue and should be more of a positive now with his light weight and proven stamina

The Scottish National form also throws up the two who beat him in that – Joe Farrell and Ballyoptic. The latter hasn’t shown enough sparkle for me this term but Joe Farrell is interesting after using the same prep race used by West Tip back in 1986. Prior to his Scottish National victory he was totally unproven regarding stamina but that should not be a problem now. He would also have a perfect score if he had just had one extra prep run this season. He probably wouldn’t want any more rain to get into the ground but no more seems to be forecast.

Last year’s winner Tiger Roll isn’t far behind on the table and it’s just the weight he has to carry which stops him getting a perfect 10. He looks an even better horse this year but as quite a small horse the addition of an extra 6lbs on his back is going to make life quite hard here. His stamina seems assured but last years race was run quite steadily early and he only just held on at the end. If there is a truer gallop throughout this time it could also root out any flaws here.

In the same Gigginstown colours,Gordon Elliott’s Dounikos appeals more at much bigger odds. His best performance came when upped in trip last time and despite running off his highest mark yet he could still be on the upgrade. I’m not sure if the rain this week is what he wanted or not but jockey bookings suggest he’s better fancied than General Principle here. He only fails to get 10 points because of his age but as a French bred he is likely to be more forward at 8 than others. He’s also a big unit who should be able to cope with carrying 11 stone in these conditions

Rock the Kasbah also comes in at 9 points but his lack of a recent run is something I find hard to ignore.

Of the others the ones of most note to me are:

Pleasant Company. Second last year and though his preparation this year doesn’t look ideal it is exactly the same as then so he can’t be totally ruled out. At 11 he’s not likley to have improved though and I think David Mullins gave him an exceptional ride last year. I’m disappointed he’s not renewing the partnership

One For Arthur. Beset by problems since winning impressively 2 years ago. Unseating his rider in his only two runs this year doesn’t read well and this would be a mammoth ask

Folsom Blue. Arguably unlucky not to win last year’s Irish National this one has bottomless stamina and the rain this week hasn’t really been enough. If it were to pour down again we can’t discount him despite being 12 years old. If this race were over 6 miles he would be the pick!

Ramses de Teillee. Only has 7 points because 7 year olds have an awful record in this. I think he was trained for the Welsh National this year where he finished 2nd. That qualifies him for stamina here but his best form seems to come at Chepstow and he also had a very hard race since then at Haydock

Rathvinden. I’ve always been sceptical about using the National Hunt Chase as a market for stamina but it was fine for Tiger Roll last year. Rathvinden seemed to have a very hard race when he won that last year and it was well run so his stamina seems assured. He has plenty of class and could be well weighted here but only having one prep race this season is quite a big negative

Three of them this year. Always look for the firms offering extra places but my money is on these (with first named being the main selection)

Posted by senormoodoir on April 5, 2019 in Uncategorized