The blog returns for its annual bash at trying to find some winners at National Hunt racing’s showpiece meeting.

I’ve included some stats for previous years posts but as last year it would be pointless to do the same again when www.gaultstats.com does a far more comprehensive job. I’d very much recommend this for those who follow such trends – but do remember to contribute to it if you do

This year’s blogs will be kept quite concise due to time limitations. Comparison of odds and place terms can always be found at www.oddschecker.com

Weather is always a major factor and this year appears wetter than most (after a mild Winter seeing not too much traditional Winter ground). As of Monday, the ground is described as Good to Soft (Soft in places). Whilst Cheltenham drains very well (and with the water table likely to be low this year to help that) it should be noted that a wet morning is predicted by the Met Office on Tuesday. Soft ground looks increasingly likely by the time the crowd does its traditional roar for the first race.

Onto the action for Day 1:
1.30 Skybet Supreme Novice Hurdle

The curtain raiser looks a very competitive affair this year and I could easily make a case for half of the 18 strong field.

Early favourite Al Dancer has drifted out from 7/2 to 5/1 since the final declarations and would be attractive at that except the drift is probably due to him not being declared with his usual headgear of a hood this time. There’s some quite close form lines between his main rivals which is seen by the closeness of them in the betting.

It looked a bit too hard for me whilst expecting 3 or event 4 places to be offered but when William Hill decided to offer 1/5th odds for the first 7 it suddenly became a lot more attractive.

It would be hard to lose with such an offer that can’t be profitable to them and I’m most attracted to backing THE BIG BITE at big odds with those terms. His price of about 40/1 isn’t offering massive value for win only but then that gives 8/1 to finish in the first 7 I have to think that is far too generous.

Representing, last year’s winning trainer/jockey combination he looked a proper prospect with two impressive wins on left handed tracks. Upped in grade at Kempton, he struggled to cope with a sharp right handed track and I think will be much better suited by this course. Nevertheless, it should be remembered he gave weight to his rivals that day (Mister Fisher and Thomas Darby 8lb and 3lb worse off). 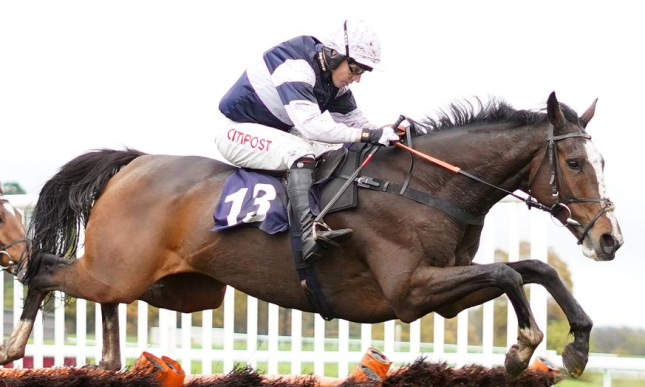 On paper this is a weak renewal compared to recent runnings.

Glen Forsa impressed with his forcing tactics and jumping last time when upsetting hot fav Kalashnikov. He certainly won’t have an easy time up front here though with Articulum, Ornua and Knocknanuss all others who like to race from the front.

This should suit a hold up style horse and Lalor would be my idea of the winner if it wasn’t for the forecast rain.

His form at the course before Christmas looks the best on show but he subsequently disappointed when the ground got deep at Sandown.

Coo Star Sivola was a winner for the blog on this last year and has to be on the shortlist again carrying only a 3lb higher mark. His form this year though isn’t so encouraging so I’m turning to last year’s 3rd and 4th as the picks now

Both VINTAGE CLOUDS and BEWARE THE BEAR are proper stayers who will appreciate any rain putting an emphasis on their stamina and have proven themselves at the track. They might be vulnerable to any lurking improvers but again this is all about big prices with enhanced place terms

Up for Review was the other for my shortlist but his price has droped markedly since 16/1 appeared yesterday (now closer to 8/1). He was given an eyecatching ride last time when racing wide throughout. His previous form at the course is the negative that just puts me off a little

Back both Vintage Clouds 20/1+ and Beware the Bear 16/1+ ew with firms offering a minimum of 5 places
3.30 Champion Hurdle

The centerpiece of the days sees and intriguing 3 way battle between reigning champ Buveur D’Air, Apples Jade and Laurina

On her form this season, Apples Jade is clearly the one to beat for me but there are concerns that will stop me from backing.

She was a disappointing fav at the meeting last year when later found to be in season. Connections are worried that the trip from Ireland could bring that on again and we’ll only know what form she is in by her demeanour in the paddock. Price movements late on here should tell us what we need to know.

I’m not totally convinced Buveur D’Air is totally at home on this track despite winning two Champion Hurdles. Last year’s race wasn’t a top class one but he didn’t have an ideal preparation.

The other protagonist Laurina is a dreadful price on what she has achieved. She’s never been raced at this level before and the low odds are all about her stable/jockey combination. If she wins she can be considered a new superstar but I’d need much bigger odds to take any risk on her

4.10 The Mares Hurdle is another race I’ll happily leave alone. With the current Black Sheep of the betting industry owning the first and second in the betting don’t expect the roof to be raised if either win. Lady Buttons would be a popular win for the North but the lack of experience of her jockey at the course puts me off her as an each way bet to oppose the favs

RIDERS ONTHE STORM interests me most here. He was value for far more than his actual winning distance last time when not doing much in front. That has probably helped him to get a mark of 141 when he has the look of a 150 horse to me.

I don’t think he would have been out of place in the Arkle earlier in the day on that form and all his main form is at 2 miles. His connections only entered him in this race though and it’s clearly been a long term plan (trainer won the race before with Fingeronthepulse).

I have slight preference for Ballyward over Ok Corral at the front of the market but this could be a real slog over 4 miles with all the rain that is forecast, I think both may be a bit too short because of that. (There are a couple of runners I would have fancies more for this race that have both been diverted to Wednesday’s RSA which has killed some interest now here for me)

Good luck with whatever your selections are and above all enjoy the meeting!

Posted by senormoodoir on March 11, 2019 in Uncategorized