A very short post for Day 3 of the York Ebor meeting I’m afraid with my time available.
It’s a tricky meeting to assess so far. Day 1 strongly favoured prominent racers but after only 2mm of rain on Wednesday night the ground had livened up a little (although still slightly on the soft side of good). Despite a tailwind this seemed enough to give the hold-up performers much more of a chance on Thursday’s card.
With little rain forecast it could well be genuinely good ground by tomorrow.
There are no recommendations for me on Friday’s card but an early one is given for Saturday. The races are generally too competitive and I’m struggling to see any value.

My thoughts for the main race of the day – the Nunthorpe Stakes at 3.40:

A large 20 runner field with some strong early pace likely on both sides. Justineo (stall 1), Cotai Glory (8), Take Cover (19) and Stepper Point (20) are the likely early trailblazers. I’d still be a little concerned that there may be some dead ground in the first couple of furlongs on the stands side which could favour the pace coming from the lower draws.
That should favour the favourite Acapulco in box 4. The American 2yo – who more closely resembles a 4yo – was a Royal Ascot sensation when she ran away with the Queen Mary. Wesley Ward’s filly was physically some way ahead of her rivals then and although up against her elders then she has a huge weight allowance on her side in this event to counteract that.
I’m sure she is on a similar level to previous 2yo winners of this race (Kingsgate Native was a similar type) and is definitely the one to beat in my mind.
The ground may have been a bit of a worry a few days ago but it seems to be coming back in her favour. Her American pedigree wouldn’t have screamed out that she would be suited by cut but it should be noted that No Nay Never (probably the best known progeny of Scat Daddy to race on these shores in recent years) did win on Good to Soft in France as a 2yo.
It’s probably more of a concern for me that she is ridden by a jockey with no experience of English tracks.
If the ground does still look to be on the soft side then I’m quite sure that Mecca’s Angel would be the main danger. The more it dries out the less she is favoured though.
It’s unlikely to get fast enough for Goldream or the veteran Sole Power. I had an ante post interest at a very big price on Line of Reason after his Goodwood effort (would have been much closer but for being drawn on wrong side of the track). Likewise he needs fast ground though and so I have almost written that bet off now.
Muthmir won that Goodwood race but he’s plenty short enough for me now on the overall level of his form this season. The sensational strike rate of his trainer William Haggas this week should keep his price low.
Acapulco is the selection but not a strong one given the low price of around 2/1 in such a big field where traffic problems could be an issue. 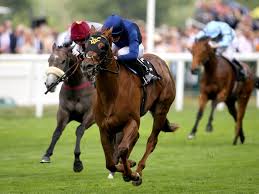 Elsewhere on the card I’m a little surprised to see Brian Meehan’s Perkunas chalked up at around 8/1 in the 4.20.
This is often a hot 2yo maiden and there look to be several decent types entered here. Meehan did make a point of saying he considered this one as his best chance of the week on Channel 4 last weekend and continues to be very positive about him on his website. His 2yos generally improve a lot on their debuts and Perkunas showed plenty of promise on his. I expected him to be shorter given the obvious heads up we have been given.

I’ll be back to focus on my favourite handicap race of the year, Saturday’s Ebor, tomorrow
Arabian Comet is my early recommendation which I will expand on more tomorrow.
She has been given some pretty mediocre rides this season by Pat Cosgrave and now that Graham Lee is taking over I think she is overpriced at a general 20/1 given the excellent form of the Haggas stable
Recommendation
0.75pts ew Arabian Comet 20/1 (generally available)

Thanks for reading
Paul