As a special request for one particular racegoer tomorrow – an extra offering for day one of the Chester meeting – though after a fairly dismal display at the Guineas weekend (10pt loss on recommendations) anyone can be advised for steering well clear of selections below!
It’s hardly an earth shattering revelation on Chester’s tight turning course that a low draw is a big advantage – even in the longer races. If heavy rain does get involved this can be negated but at the moment the going is good 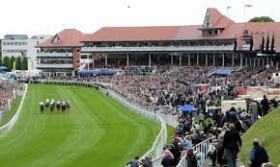 1.45 Lily Agnes Stakes
Two pacey David Evans trained 2yos should make hay from stall 1 and 2 here and I suspect that Cheerio Sweetie has the best form of them. She was beaten 1.5 lengths by Mukhmal last time in a decent looking affair. He is drawn way out wide now and is 9lb worse off so is going to have to prove himself a very smart 2yo to maintain his superiority. The low draw is built into Cheerio Sweetie’s price at around 3/1 but as long as she breaks as well as she has done in recent starts she looks the natural one to beat.

2.15 Cheshire Oaks
Aidan O’Brien has done well in this race in recent years and fields the fav here in Terrific. She doesnt stand out as a star of the stable yet and ran as if needing this trip last time – a word of caution though – her full sister Together showed all of her best form at a mile.
John Gosden won this race with Gertrude Bell after winning a division of the same Newbury maiden that Bright Approach won – it would be no susprise to see her build on that win where she looked quite green and follow up at this higher level.
But from a value angle I am drawn to Brown Diamond. Charles Hills’s father Barry used to farm this race in the past and his son looks to have a promising type here. There is a question mark on her stamina from her sire’s side but the dam comes from the Aga Khan’s stamina laden stock. She’s put up promising efforts on both starts behind others who have franked the form since and appeals at double figure odds here

2.45 Chester Cup
Two big things I look for here are proven stamina at 2 miles or more and previous form at the track – a decent draw is then an added bonus.
Normally form from previous running sof this race is important but it’s very odd to find none of that this year.
Communicator has the best course record for me but is a quirky type who hasn’t proved himself at this trip yet.
Angel Gabrial has shown form here and proved his stamina for 2 miles last time. He is probably the best fit for the criteria but is a hold up horse which could cause anxiety issues here (particulary with Jamie Spencer on board – who can overdo these tactics frequently). He is going to need some gaps to open for him at the right time I expect.
It’s not very exciting but I make the favourite Mubaraza a slightly safer proposition as he has a decent draw and can adapt to a more prominent position through the race. Having no course form is the one concern here but he seems a reliable sort at this level.
Mubaraza is therefore the marginal choice over Angel Gabrial (the two are closely matches on their last duel at Ripon) but I have backed both each way for the race

3.15
A draw of 7 isnt perfect but Ballista has strong form at this course and loads of early pace (has led Group 1 sprinters off the blocks before). There are several drawn low who haven’t quite mastered a speedy break in some of their races and he could take advantage of that early here.
10/1 is probably a price based on his draw but I find it attractive in the hope it isn’t as bad as others think ( he has won a handicap easily here before from stall 14 which is no mean feat!)

No fancies in the later races or me but Prince of Stars could be heard all over Newmarket before an encouraging debut last month. He can only improve after such babyishness but wouldn’t expect much of a price to emerge for him

Posted by senormoodoir on May 6, 2014 in Uncategorized