The flat season really started to hit gear in the last 10 days with the first major 3 year old trials for the 2000 and 1000 Guineas in early May.
Looking further ahead to June, however and there were a couple of performances that took the eye for the Derby and the Oaks and where some decent odds appear worth taking

Epsom Derby 7th June
Still very early for many hands to be played in this but while it is an acknowledged trial for the Guineas it was interesting that Luca Cumani chose this race for the reappearance of Postponed.
Everything about his pedigree and his running style as a raw 2yo last year suggested that a 10 furlong minimum trip was what he needed and yet he was backed for this 1 mile race.
Not surprisingly he got outpaced after a slow early pace quickened up but he was staying on powerfully in the final furlong.
Dubawi’s stock tend to progress well with racing and I think we can expect to see some significant improvement when he faces a trip.
He is entered in the Dante but it might be most telling if Luca sends him to the Lingfield Derby Trial – a race he used as a springboard for his previous two Derby winners – Kahyasi and High Rise
Not all firms quote him as yet but 66/1 is available in a place and that’s an appealing price at this stage

Epsom Oaks 6th June
Winners of this are frequently unexposed types as 2yos but a notable race for spotting future talent was the 1¼ mile maiden for fillies at Newbury on the 11th April
Despite being a maiden the cast list of winners in last 10 years bears witness that trainers send some decent types to this event.
Dancing Rain (2011) and Eswarah (2005) both went on to win the Epsom Classic. Other winners – Vow, Gertrude Bell and Clowance all finished 4th at Epsom – the latter two also tasting subsequent Group level success. Folk Opera (2007) went on to record a Group 1 victory, while Pink Symphony also progressed to Group 3 glory in 2010.
Last year’s winner Banoffee didnt quite match those heights but did run at Epsom finishing 7th after coming from this maiden to win the Cheshire Oaks on her next start
This leads us onto the winners of the two divisions this year – Bright Approach and Inchila.
The former was part of a golden weekend of winners for John Gosden and still looked quite green – there doesn’t seem to be much gossip that Epsom is her destination as yet and could see her swerving that race so she is passed by for now.
Inchila, on the other hand is of much greater interest. She won her maiden easily, coasting in behind the leaders in the straight and then settling matters with a swift turn of foot. 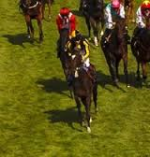 The win was all the more impressive after the way she pulled so fiercely early on in the back straight.
This freeness was also evident on her promising 2yo debut at Goodwood last year , where she was an eyecatching second behing Guineas hopeful , Amazing Maria
With a run behind her and hopefully a stronger pace, she could be seen in a better light still and there would appear to be plenty of untapped potential here.
12 furlongs wouldn’t appear to be a problem on breeding – and there’s some class on the dam’s side which contains many notable performers from the past that would have been seen racing for Geoff Wragg in the Sir Philip Oppenheimer colours
One slight reservation would be ground – her win at Newbury came on softish conditions. I would be a little concerned if ‘firm’ appeared in the going title
Again not many firms are quoting at this point but 50/1 will do for me at this stage

Comments as always most welcome

Thanks for reading and enjoy the flat season ahead

Posted by senormoodoir on April 21, 2014 in Uncategorized