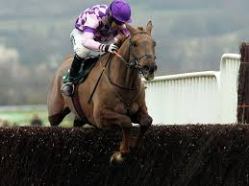 Irving slipped under the radar a bit earlier in the season but has progressed into the form leader coming into this after a very impressive win last time out at Kempton. The downsides are that his best form is on softer ground and most pertinently over right handed tracks. An undulating left hand course now faces him and with no form on such a circuit, I’d need a bit more than 3/1 to be tempted.

The Mullins stable come next in betting with Vautour (might need more of a trip and more experience) and Wicklow Brave (didn’t impress enough with jumping technique last time out). (If either or both do exceeb themsleves expect to see money for Lieutenant Colonle in Wednesday’s Neptune

And so I look for the value outsiders instead. I don’t include the Henderson pair here despite the trainer’s good record in this race – Vaniteux’s price is nothing to do with form and just about recent stable homework – Josses Hill has had a recent setback and not convinced that a stiff 2 miles is for him anyway.

( I would dearly love to see Wilde Blue Yonder win as I know one of the owners – but it’s against my religion to back anything that has FF next to its form – hope it runs well though!)

Gilgamboa. I can remember only Redundant Pal trying the Boylesports Hurdle– Supreme double in recent times, and he managed 5th in 1989. He looks a progressive sort and we know he operates at a good pace in a big field. 12/1 probably about right but can see him shortening with the McCoy factor.

The Liquidator boasts something quite rare in this field : course form!. An impressive win here in November and a solid display in last season’s Champion bumper ( statistically one of the best guides for this race), he was almost fav for this before a poor display at Kempton in January. It seemed still 50-50 he would run here last week but have to assume he’s showing something again at home now he is the sole representative from his stable’s strong novice team. A big player if back to his best.

The one who shouldn’t be 50/1 though is Three Kingdoms. His form is all largely handicaps but the form of the one he ran at on this course before Christmas should not be sniffed at – giving weight to Quick Jack and Deep Trouble who now have far higher marks. He has also beaten the highly progressive Vibrato Valtat on ground that probably wasn’t ideal. That form isn’t reprentative of his price here ( a quick glance at Racing Post ratings will confirm that) and he has to be a bet

I don’t remember a year I didn’t fancy anything here but find 2014 a bit of a minefield with no value appearing.

Champagne Fever looks the one who should be the best chaser but experience lacking – he may get the lead to himself here though which well help.

Expect Trifolium (needs softer ground?) and Rock on Ruby (only form in 2 and 3 runner races so experience a huge problem) to be trying to keep early tabs on him

Grandouet may have been best of these over hurdles but just doesn’t look as if he’s transferred all of that ability to chasing yet.

Valdez is out of his depth to me

2.40 Baylis and Harding Affordable Luxury Handicap Chase (or the ‘Ritz Club’ for those of us with penchant for the older titles)

If we apply form at previous Festivals now, the standout is Time For Rupert (one time RSA fav and runner up to Big Bucks in the World Hurdle).

Injury has seen him slip from the top flight but so has his handicap mark and he showed his first return to form last time out at Doncaster. This course has always suited him very well and he’s fancied to reagins some of his former glories

Solix is another that interests me right at the bottom of the weights. He too has previous Festival form running 5th in the 2011 Coral Cup off a 23lb higher mark than he has tomorrow. The suspicion was he had lost his form but in the Skybet Chase in January he had many in trouble on the home turn until the soft ground told and he finished 4th. Better ground will undoubtedly help him .He finished placed at Sandown only last Friday when soft ground/rh track combination didn’t suit at all – there is a chance of course this may come too soon after that but at the price it’s a chance worth taking.

Muldoon’s Picnic is the final selection here – no course form, just a belief that he could be reasonably treated now that the ground is getting better once more

The piece de resistance of day one! I really would have liked to have seen Annie Power and Un De Sceaux take their chances here but we still have a stellar field as Hurricane Fly attempts a 3rd win in the event.

The inclusion of Captain Cee Bee in the field as a pacemaker is a blessed relief. His stablemate, My Tent or Yours shouldn’t have any problems with a slow early pace now, and The New One won’t have to make the running

It all makes for a fairly run event and hopefully no excuses. I am of the opinion that Hurricane Fly’s best form is at Leopardstown rather than here (though not by a huge amount), and I don’t back 5yos in this race so Our Conor is not for me (maybe next year)

Going for the place angle here with

Another No Bet race for me.

Foxrock looks the obvious one to be laid out for this race but 5 and 6yo have a very bad record in this which counts against him at the price and Rogue Angel.

I’ve tried to find an interesting outsider but so far failed to come up with anything!

Things to look for here from a stats perspective:

All of this leads me to Close House as the pick – this ground and trip look optimum and his chase mark is 8lb lower than his highest hurdles mark. He could have crept in leniently.

As ever comments are appreciated – have a good week with whatever you back and enjoy the spectacle!

Evening update – value appearing in the Mares Hurdle now in the ‘without Quevega’ market
Doyly Carte will like better ground and not sure that Cockney Sparrow would have beaten her at Doncaster last time if she had stayed up. Jockey booking now unknown but 20/1 without the fav is too big for me. Kelso run last time was poor but all of Donald’s ran badly that day and the stable form has turned since.
Recommendation: 1pt ew Doyly Carte w/o the fav @20/1 (1/5 123) – Paddy Power/Stan James

Posted by senormoodoir on March 10, 2014 in Uncategorized